Home » How-Tos » Tech » How to Gift Skins in Fortnite 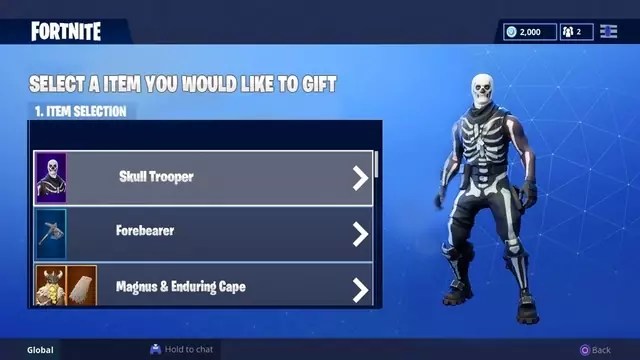 Epic Games allowed players to gift Fortnite Skins and items to other players in its most recent update. The new service lets you and unwanted skins or cosmetics to others. Previously, Fortnite players were only allowed to refund three-item, but it was limited to three items per account.

The new option has been brought in to clamp down on account trading where players grind for particular skins and sell accounts to other players.

How to gift Fortnite skins

You can now turn on the option to receive gifts in the ‘Account and Content’ section, though there has been no official date as to when they will turn on the feature and let you gift items to other players.

We do not know whether Epic will allow players to transfer V-Bucks or emotes to other players, but usually, in games like this, currency is locked to accounts.

This update will hopefully be able to stop players from farming skins to sell accounts online for a profit.

Fortnite is a free-to-play game so gamers are able to create multiple free accounts and grind challenges to secure skins to sell of steep prices online.

Epic Games has said they are looking to cut down on this kind of behavior, and gifting skins will hopefully pull the attraction away from players, encouraging them to share skins for free instead.